Launched just over five months ago, NASA’s newest planet hunter, the Transiting Exoplanet Survey Satellite (TESS) has sent back its first detailed look at a patch of the southern sky and has also revealed the location of its first find - a super-Earth exoplanet around a younger, but bigger version of our sun.

Located in the constellation of Mensa, this yellow sub giant star known as Pi Mensae (or HD39091), can be seen with the naked eye in exceptionally dark, clear skies. Pi Mensae was one of several hundred thousand pre-selected stars TESS has earmarked for further investigation, no doubt due, in part, to the discovery of a massive Jupiter-type planet that had already been spotted orbiting this unusually bright star back in 2001.

This massive superjovian (dubbed Pi Mensae b) is one of the most massive planets ever discovered and now, thanks to a team of astronomers working on the new data provided by TESS just a few months after the satellite took to the skies, a smaller companion has been found whizzing around the same star but in a fraction of the time of its behemoth neighbour – just 6 days, compared with the 5.7 year orbit for Pi Mensae b.

Although the discovery has yet to be reviewed by other scientists to validate it, the preliminary analysis suggests that Pi Mensae c, the newly found exoplanet, is around four times as massive as Earth and contains a substantial portion of lighter materials — such as water, methane, hydrogen, and helium — in addition to a rocky/iron core.

Not a lot is known about systems such as these, i.e. a giant planet on a long-period, highly eccentric orbit, coupled with a super-Earth close in to its host star, but the international team whose lead author is Chelsea X Huang from the Massachusetts Institute of Technology, US, say that astrometric observations with the Gaia spacecraft might ultimately reveal the full three-dimensional geometry of this system to provide clues about how they form.

Meanwhile, TESS is busy sweeping the skies for more exciting discoveries. Its “first light” science image (below) that the satellite relayed back is a stunning vista of the southern sky that includes both the Large and Small Magellanic Cloud, the bright star R Doradus and parts of a dozen constellations from Capricornus to Pictor.

This swath of the sky’s southern hemisphere includes more than a dozen stars (aside from Pi Mensae) that astronomers already know have transiting planets based on previous studies from ground observatories.

“In a sea of stars brimming with new worlds, TESS is casting a wide net and will haul in a bounty of promising planets for further study,” said Paul Hertz, astrophysics division director at NASA Headquarters in Washington.

A statement that has already come to fruition with the first round of data collected by this auspicious mission. 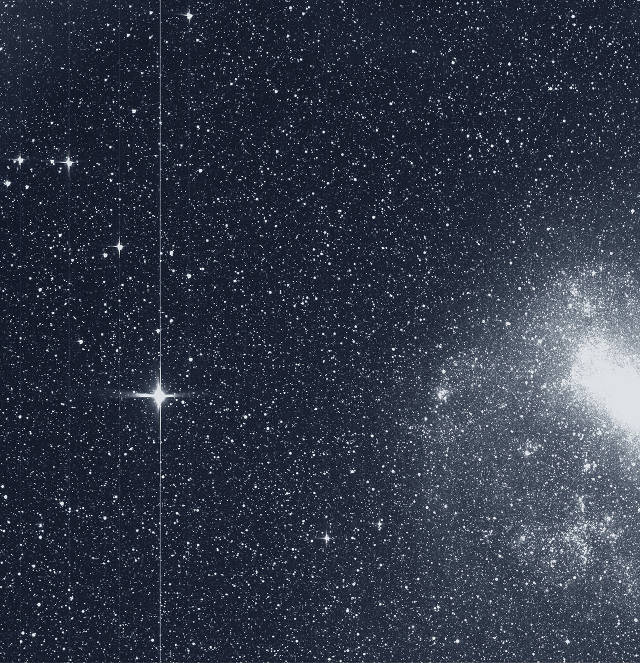 A snapshot of the Large Magellanic Cloud (right) and the bright star R Doradus taken by TESS in its “first light” science image on 7 August, 2018. Image: NASA/MIT/TESS