Virgin Galactic’s passenger spaceship has made history with her maiden spaceflight as it successfully reached the edge of space yesterday to return without a hitch back in the Mojave Desert in California.

After taking off attached to the company’s carrier plane WhiteKnightTwo, VSS Unity rocketed to an altitude of 82 kilometres (51 miles) before cruising back to ground in a gliding descent.

The trip marked the plane's fourth test flight after earlier attempts had succumbed to setbacks.

On its return, the ship and its pilots Mark “Forger” Stucky and Frederick “CJ” Sturckow were greeted by an emotional Sir Richard Branson who acknowledged that “people have literally put their lives on the line to get us here. This day is as much for them as it is for all of us."

The company said that during the flight the spaceship reached Mach 2.9, nearly three times the speed of sound, as it touched what it considers to be the edge of space.

Virgin Galactic considers 80 kilometres (50 miles) to be the threshold which separates Earth’s atmosphere from outer space because that is the distance used by the US Air Force and other US agencies. However there is a long-held view that the boundary – a region known as the Karman Line – lies a good distance higher at 100 kilometres (62 miles).

In the eyes of the US however, the boundary has been passed and the Federal Aviation Administration (FAA) has announced that early next year they will present the pilots with FAA Commercial Astronaut Wings at a ceremony in Washington DC.

Since the company’s inception in 2004, Virgin Galactic have made bold claims about its expected timescales for making space tourism a reality. In 2008 it said sub-orbital spaceflight trips would be taking place "within 18 months.” But delays and a fatal crash in 2014 of the VSS Enterprise in which the co-pilot Michael Alsbury died, slowed down Sir Richard's original ambitions.

Nonetheless, despite this misfortune, more than 600 people have already bought tickets or put down deposits, said Sir Richard. At a cost of $250,000 for a 90-minute flight, seats do not come cheap for this ultimate thrill ride that will take you out-of-this-world (depending on where you believe the boundary to be). 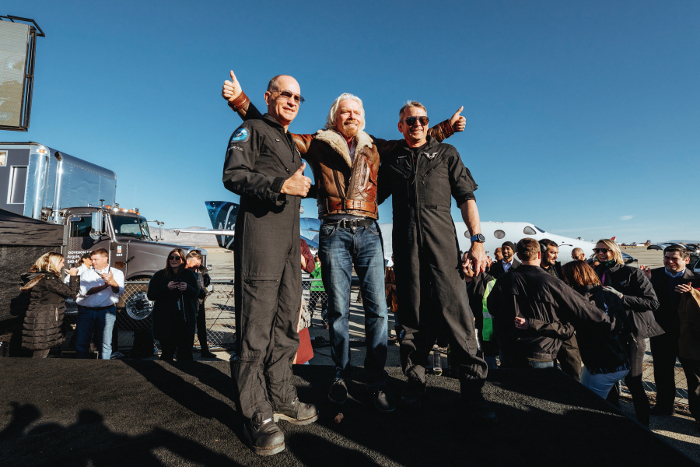