If there is one notable feature on Jupiter that nearly everyone can identify, it is its Great Red Spot. This huge swirling maelstrom of gas that has been raging in Jupiter's skies for more than 150 years has recently been the focus of a study that has helped astronomers answer a very long-standing question about the largest planet in our Solar System - how much water does this gas giant contain.

Clues to help answer this age-old question were first provided by NASA's historic Galileo probe which plunged into Jupiter's atmosphere back in 1995 at a staggering 106,000 miles per hour. Before it was obliterated in the depths of the enormous planet's crushing interior, the probe managed to relay 58 minutes of data back to Earth, but the results were puzzling to say the least.

Jupiter contains more than twice the mass of all of our other planets put together and 99 percent of its atmosphere is composed of hydrogen and helium. Not only that, but the gas giants many, many moons (all 79 of them) are mostly made of ice, so it had been assumed that the planet's atmosphere would contain a considerable amount of water – many times more water than we have here on Earth. However the region that Galileo plunged into turned out to be a lot drier than researchers had anticipated.

Something certainly seemed amiss, so with the aid of two instruments on ground-based telescopes, iSHELL on the NASA Infrared Telescope Facility and the Near Infrared Spectrograph on the Keck 2 telescope, a team of US scientists now have evidence that paints a very different picture of the data obtained from the Galileo probe.

Lurking within the Great Red Spot, the team found evidence of three cloud layers stretching down 160 kilometres (100 miles), and while the dense clouds make it hard for electromagnetic energy to escape, the team were able to analyse the absorption patterns of a form of methane gas. Methane is not expected to freeze on Jupiter as the planet is too warm, so its abundance should not change from one place to another on the planet.

"If you see that the strength of methane lines vary from inside to outside of the Great Red Spot, it's not because there's more methane here than there," said Gordon L. Bjoraker, an astrophysicist at NASA's Goddard Space Flight Center in Greenbelt, Maryland, and the lead author of a recent paper in the Astronomical Journal detailing this research. “It's because there are thicker, deep clouds that are blocking the radiation in the Great Red Spot."

The deepest cloud layer, the team concluded, is right where the temperature reaches the freezing point for water, said Bjoraker, "so I say that we very likely found a water cloud."

"The discovery of water on Jupiter using our technique is important in many ways”, said Máté Ádámkovics, an astrophysicist from Clemson University. “Our current study focused on the red spot, but future projects will be able to estimate how much water exists on the entire planet,"

Although the chemical signatures of water have been found, the quantity is still under question. But coupled with the team’s measurements of carbon monoxide, which implies that Jupiter has 2 to 9 times more oxygen than the sun, and combined with the gas giants abundant hydrogen content that permeates the atmosphere, then water should indeed be prevalent.

"Water may play a critical role in Jupiter's dynamic weather patterns, so this will help advance our understanding of what makes the planet's atmosphere so turbulent. And, finally, where there's the potential for liquid water, the possibility of life cannot be completely ruled out. So, though it appears very unlikely, life on Jupiter is not beyond the range of our imaginations,” added Ádámkovics.

Although Galilieo is no longer on hand to provide additional data to back up these findings, there is a new probe on the scene – Juno, and the spacecraft is currently circling the planet to look for, amongst many other things, water.

Juno is equipped with an infrared spectrometer and a microwave radiometer that can probe deeper than anyone has seen on another planet – up to 100 bars, or 100 times the atmospheric pressure at Earth's surface.

If Juno returns similar findings, it will substantiate the results from the ground-based technique, and a new window into solving the water problem could open up, said Goddard's Amy Simon, a planetary atmospheres expert.

"If it works, then maybe we can apply it elsewhere, like Saturn, Uranus or Neptune, where we don't have a Juno," she said

Chemically speaking Jupiter is the closest relative to the Sun, and the gas giant is thought to be the first planet to have formed by consuming the elements left over after the Sun was formed. Therefore, understanding how Jupiter formed is key to learning more about how the Solar System formed. 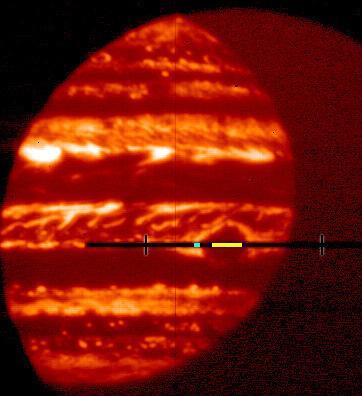 The Great Red Spot is the dark patch in the middle of this infrared image. It is dark due to the thick clouds that block thermal radiation. The yellow strip denotes the portion of the Great Red Spot used in astrophysicist Gordon L. Bjoraker's analysis. Image NASA's Goddard Space Flight Center/Gordon Bjorake