Following in the footsteps of the US, French President Emmanuel Macron has announced that France will begin the establishment of a new national military space force command, “to assure the development and the reinforcement of our capacities in space.”

Since the announcement, further details have emerged from French Minister of Defence Florence Parly who advised, according to the French news weekly Le Point, that its new space force will be equipping its satellites with cameras, machine guns and lasers to defend against any potential attackers.

It is envisaged that preparations will start with cameras being attached to the next generation of Syracuse satellites to allow them to identify possible aggressors. The next round of satellite development will then involve the attachment of devices capable of destroying solar panels, and/or blinding and destroying hostile satellites in the event of an unwarranted attack.

"Having a reinforced space defence is absolutely essential: it is our freedom of appreciation, access and action in space that is at stake," explained Parly, as she gave a speech at Airbase 942 in Lyon-Mont Verdun in front of more than a hundred Air Force personnel on 26 July.

The minister did emphasise however that France has no intention of violating the international Outer Space Treaty of 1967 which prohibits the testing of weapons of mass destruction or nuclear weapons in orbit. Neither do they want to contravene another United Nations treaty which seeks to prevent the first placement of weapons in outer space.

"We do not want to embark on a space arms race," Parly said. "We will conduct a reasoned arsenalisation."

France’s current military spending plan for 2019-2025, which amounts to around 3.6 billion euros ($4 billion) and will amongst other things, fund the launch of three formation flying CERES electromagnetic-monitoring satellites, and the modernisation of a spatial radar surveillance system called GRAVES, is to be given a 700 million euros boost as part of the creation of the space force said Parly. This extra funding is a reallocation of monies already allocated to the ministry, said sources and it will not be siphoned off from other governmental departments to finance this new space activity.

It was also revealed that the ministry has plans to create a swarm of nanosatellites to be placed around France’s most strategic objects with effect from 2023.

France plans to have its new space command up and running to full capacity by 2030. It will be staffed by 220 personnel from the French Air Forces' Joint Space Command, the Satellite Observation Military Center (CMOS) and the Operational Center for Military Surveillance of Space Objects (COSMOS).

Operations will begin from 1st September, when selected officers will join staff already attached to the Centre national d'études spatiales (Cnes) facility in Toulouse where the new Air Force Space Operations Center will be based. 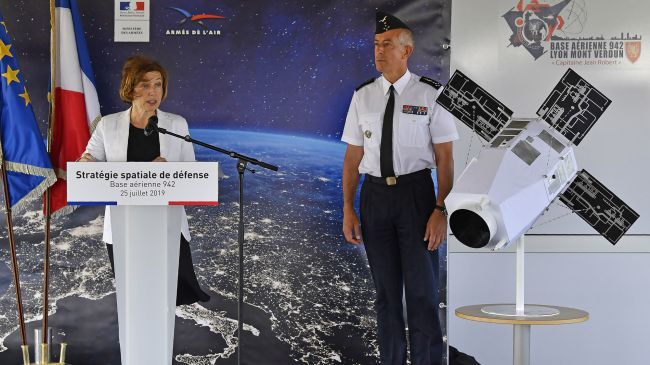 French Minister of Defense Florence Parly (left) discusses the new French space force in a speech at Airbase 942 in Lyon-Mont Verdun, on July 25, 2019. Next to her on stage, French Air Force general Philippe Lavigne stands beside a model of a satellite. Image: Philip Desmazes/AFP/Getty.