ESA announced its world-first firing of an air-breathing electric thruster that eats up air molecules from the top of the atmosphere to use as fuel. The technology is set to pave the way for how future satellites could fly in very low orbits for years at a time.

The thruster, which was tested in a vacuum chamber in Italy to simulate the environment at 200 kilometres altitude, benefits from a simple design that has no valves or complex parts and all that is needed is power to the coils and electrodes. This in turn creates an extremely robust drag-compensation, meaning it needs little force to propel it through the atmosphere.

The thruster builds on the work already undertaken by ESA for their GOCE gravity-mapper satellite. GOCE also utilised an electric thruster design, but it was fuelled by xenon atoms that had some of their electrons stripped away by an electric discharge. The newly-formed ions were then ejected towards the rear of the satellite to give a very gentle and smooth thrust.

Although GOCE flew for more than five years, its working life was restricted by the amount of propellant it could carry. Hoping to overcome this limitation for future thrusters, ESA’s design team set about finding a way to continually replenish the onboard fuel and thus keep the satellite working.

“This project began with a novel design to scoop up air molecules as propellant from the top of Earth’s atmosphere at around 200 km altitude with a typical speed of 7.8 km/s,” explains ESA’s Louis Walpot.

To succeed, the design had to incorporate a way to collect air molecules and compress them, rather than let them simply bounce away instead. Once perfected, the resulting product – designed by QuinteScience a company established in Poland – was tested with xenon, like the thrusters predecessor, to see if enough ‘fuel’ was collected so that thruster ignition could take place.

“The team ran computer simulations on particle behaviour to model all the different intake options,” adds Walpot, “but it all came down to this practical test to know if the combined intake and thruster would work together or not.

Finally, the xenon was replaced in stages by a nitrogen–oxygen air mixture until it could ignite solely from the collected atmospheric propellant.

“This result means air-breathing electric propulsion is no longer simply a theory but a tangible, working concept, ready to be developed, to serve one day as the basis of a new class of missions,” concluded Walpot.

And these missions might not solely be used in Earth’s atmosphere, as the air-breathing electric thrusters could be adapted to consume carbon dioxide for example in order to traverse the outer fringes of Mars, or the equivalent atmospheric molecules on other planets in the Solar System. 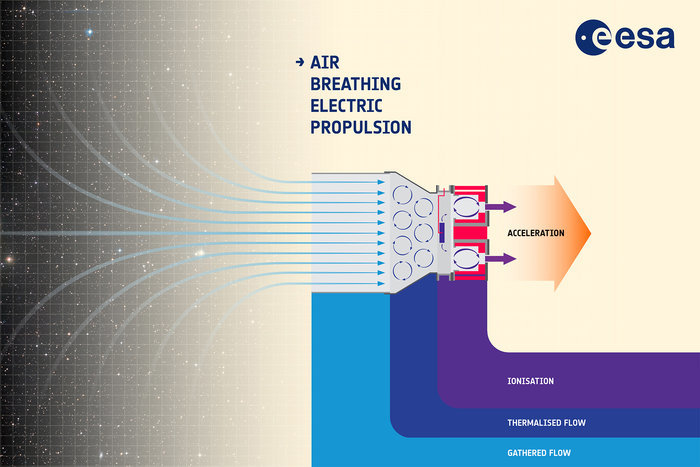 Molecules of air at the top of the atmosphere are captured by a novel type of intake, then collected and compressed to the point of becoming thermalised ionised plasma, at which point they can be given an electric charge to accelerate them and eject them to provide thrust. Air-breathing electric propulsion could make a new class of long-lived, low-orbiting missions feasible. Image: ESA–A. Di Giacomo