The latest space-related model in Lego’s Creator Expert series has landed! The Apollo 11 Lunar Lander building set was developed to mark, as the publicity accurately describes, “the 50th anniversary of a historical event that captivated the world”. The 1087 specially-designed Lego pieces produce a fairly-detailed collectible replica of the Eagle lunar module, presented on a lunar surface complete with crater, flag and two Lego-style Apollo astronauts. A well-produced colour booklet includes step-by-step instruction pictures and a 12-page illustrated summary of the Apollo programme.

The ascent and descent stages are separable and the front and rear sections of the ascent stage can be removed to reveal an interior with panel stickers. Publicity shots show the astronaut figures posed inside, but this is arguably less of a toy to play with; more of a display model to illustrate prowess in Lego-building.

Once you understand the modular building system and the visual instructions, construction is fairly straightforward. However, for the impatient, it can become repetitive which can lead to mistakes; my own impatience led to placing stickers in the wrong positions! Several hundred of the 1000-odd pieces make up the 20cm-square base or ‘lunar surface’, which was slightly annoying to begin with: I thought, ‘why am I having to build this when a single piece of accurately moulded plastic would have done the job?’ But as I constructed a crater – in typical Lego pixelated style – I realised that this should be considered a 3D puzzle rather than a model kit (à la Airfix). Indeed, like a jigsaw, it could be dismantled and reconstructed.

Although the detail of a Lego construction could never match that of a die-cast plastic model, the accuracy of Lego bricks themselves is legendary: manufacturing tolerances are such that bricks snap together firmly but can be separated. This accuracy is confirmed when one builds a module with rotating arms that, when mated with an existing module, swing through 90 degrees to snap firmly into position. And the process becomes more satisfying when one realises that the cleverness of the 3D design is pandering to Lego nerds rather than space nerds – which means that the ‘pleasure’ of construction is arguably more important than the final result.

Despite some reservations, such as an egress hatch depicted by a couple of facsimile cupboard doors, the finished model is instantly recognisable as the Apollo LM and makes a fine display item in my office. 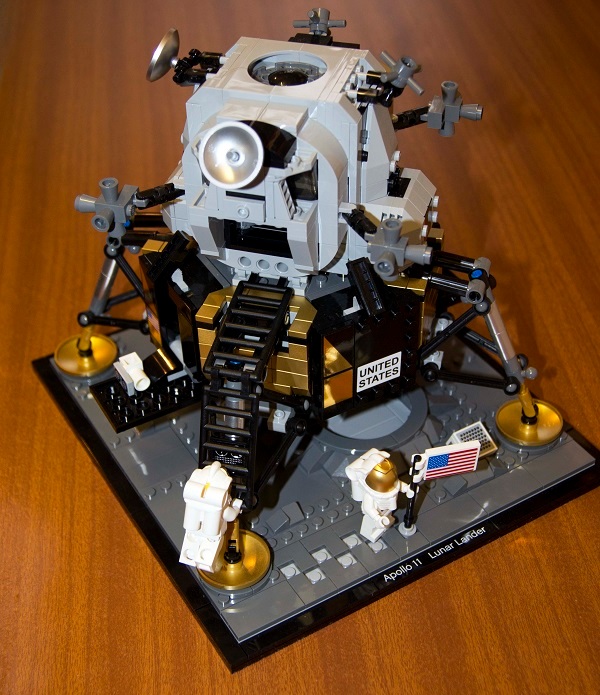