Since ancient times, comets have been considered special, set apart from planets and stars. Their unusual shapes, with long tails and unpredictable appearances, led to the belief that they were messengers of some divinity, often bringing bad, but sometimes also good, messages to mankind. Although it is now known that comets are part of our solar system, Jan Oort and other astronomers in the last century recognised that comets indeed harbour secrets. They may not carry messages from any deity, but they are real treasure chests with very old, almost unchanged, material from the early days of our solar system.

Comets harbour secrets… they are real treasure chests with very old, almost unchanged, material from the early days of our solar system

The first comet which was visited by spacecraft was comet Halley in 1986, when multiple spacecraft flew by – the closest being the European cometary mission Giotto at 600 km from the nucleus. Although this mission was a fast flyby at ~70 km/s and lasted only less than two hours, the wealth of data was amazing. Not only did Giotto measure water, including the deuterium to hydrogen ratio, but it also detected many organic molecules and strange isotopic ratios in dust grains, which points to an origin far older than the solar system. 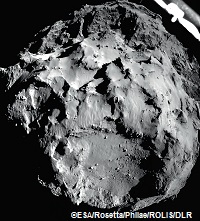 This mission triggered a strong interest in comets, which led to many planned cometary missions (CRAF, Champollion, CONTOUR). However, only a few of them were successful (Deep Impact & EPOXI, Stardust). Deep Impact shot a projectile into Temple 1 to study the material of a comet below its surface. Stardust even brought back dust grains from the coma of Wild 2 and then went on for a flyby at Temple 1.EPOXI (the former Deep Impact spacecraft) flew by another comet, namely Hartley 2.

All of these missions were flyby missions, the actual measurement times being a few hours at the most. Rosetta is the first mission to circle a comet for a large part of its orbit around the Sun, thus allowing us to follow the evolution of the comet from cold space to when it gets warmed up by the Sun. It’s also the first mission to go really close to a comet, less than 10 km from the comet centre. It is, after Giotto almost 30 years ago, the first mission to carry in situ instruments to analyse the coma gas and dust and it is the first mission to land a robot on the comet nucleus. By studying a comet over long periods it will be possible to get information about nucleus inhomogeneity and from there about how the building blocks of our solar system formed.

By carrying very sensitive instruments for the in situ analysis it is possible to determine the deuterium content in cometary water, which would indicate whether comets like 67P/C-G could have delivered our terrestrial water. It also allows detection of substances which are elusive for remote sensing due to their low abundances and/or lack of detectable transition lines. It is possible to better assess the chemistry present in a comet and to derive conclusions as to whether comets could have sped up the evolution of life. By landing on a comet we get the evidence on the ground, at least for one point on the comet, which then helps to connect the measurements made in the coma or by remote sensing to those of the nucleus.

The ultimate goal of all this is to investigate the origin of our solar system, the formation of planets including our Earth and, finally, the emergence of life on at least one of the planets. By studying the cometary nucleus we can derive how solid bodies formed from gas and dust. By looking at the heavy water - water where one of the hydrogen atoms (H) is replaced by a deuterium (D) atom - and comparing it with normal water we can assess if this D/H ratio is consistent with the ratio we have on Earth. The D/H ratio is very characteristic for the formation temperature of water.

If the Earth has a different ratio than the comet, as is the case with, for example, Oort cloud comets (twice the terrestrial value), then we have to conclude that Oort cloud comets have brought, if any at all, only a very small fraction of the terrestrial oceans. As 67P/C-G is a Kuiper belt comet, formed in a different region of the solar system, this comet could have a very different D/H ratio and such comets could then be the source of our water. Of course, if comets brought all or at least part of the terrestrial water, they may also have brought other material. Of special interest here are organics that could have sparked the emergence of life on Earth. We are therefore looking for heavy organic molecules up to amino acids. COSAC on Philae should have been able even to derive the chirality of amino acids, had it gotten some soil samples, which unfortunately it didn’t.

On Earth, all amino acids have a left handed chirality and it would have been very interesting to know if comets agree. But it still should be feasible to at least find precursor molecules of amino acids if they are there. Our Kuiper belt comet 67P/C-G seems to be a fantastic object to study. We were very much astonished to find already a very rich mix of chemical substances in the still very tenuous coma, at more than three astronomical units from the Sun. Sulfur- and nitrogen bearing species, but also many hydrocarbons up to quite heavy organics could be detected and are being analysed in detail right now.

The pictures show that the terrain is very rugged, probably very pristine material not yet softened by space weathering and sublimation. It looks almost like the comet is composed of two different cometesimals. This, however, is still under investigation. It will be very interesting to study the composition of the two pieces to see if they have a common origin in the early solar system or if some migration took place.

The deuterium in water could easily be measured and will allow us to decide if terrestrial water was brought by Kuiper belt comets. The discovery of molecular nitrogen points to a very cold origin for this comet. There are some clear indications that the nucleus is not as homogeneous as people thought. So maybe the two different lobes have migrated before they collided, although it’s still too early to come to a firm conclusion. It is also early days for the results from the lander.

Rosetta will follow the comet in close vicinity through the perihelion passage next August, when the comet will be most active 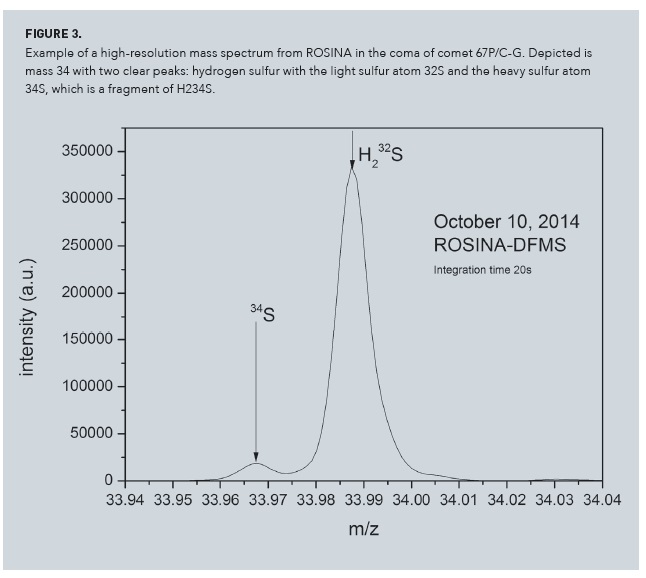 What can be said is that the comet surface is very hard, at least at the location where Philae is now. This is quite unexpected and will certainly shed light on the surface material and its processing.

Although Philae has run out of power, at least for the time being, the results it obtained are extremely valuable for the whole mission. The mission itself will go on for another 14 months at least. Rosetta will follow the comet in close vicinity through the perihelion passage next August, when the comet will be most active. We expect to get more activity by a factor of 100, which will of course release even heavier organic molecules and which will help to derive abundances of rare species including isotopes.

It will also be interesting to monitor as the surface layer will certainly change when more material sublimates. Connecting all the measurements, from pictures, to surface and subsurface temperatures, to chemical analysis of dust and gas, to studying the interaction of the comet with its environment (the solar wind), will give us a much better understanding of:

The mission is already a huge success, due of course to the successful landing, but also to the outstanding performance of the instruments on Rosetta. By the end of the mission it will be difficult to top it. The next step has to go towards a sample return mission because this will then allow the study of cometary material with all the fabulous machines that we have in the labs, but which you cannot fly. But there may be some intermediate steps needed before we are at this stage, missions getting even more information about the surface layer and the inhomogeneity of a nucleus, to make sure that a sample return mission will be successful and will bring back material which is representative. 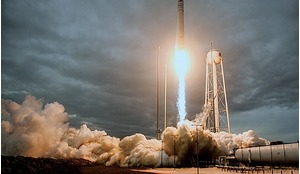 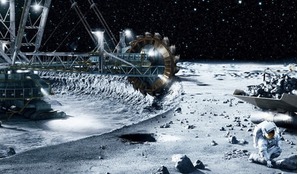 Space Mining – the Reality of Tomorrow?