Most of those pages are the manuals that cover the aircraft or the airline. As aircraft have been developed, they have become so much more capable, which requires more procedures and explanations. Hence the manuals have grown. In addition, each and every flight must be supplied with a ‘flight envelope’ that contains route information, weather briefings, manifests and other documents that supply another 60-100 pages of material. This all needs to be printed out before the flight and put back, filled out correctly, after the flight.

If you are an airline, just the basic logistics of keeping up to date with all this is a nightmare. Imagine if you have 200 airplanes, and you have to print out 100 pages before each flight. If those airplanes do 4 flights a day, that’s 400 times 200, that’s 80,000 pages a day. It’s amazing how much paper is going through the aerospace industry.

Just transferring everything to pdf format for electronic storage and reading would be a big boost. At the most simplistic level of description, this is what Aviobook is all about.

Aviobook is a software system that consists of two components: an app running on a tablet, either Windows or iOS. And the second component is a backend piece, a grand server if you will, which is talking to the tablet. At the same time, the backend also functions as an intermediate step between the tablet and the airline’s legacy systems, where material is filed and archived.

All of the information that would have been printed out, is transferred digitally through the ground server application to the tablet app. To make sure the data is kept in order, the application is divided into a dozen different modules. This is comparable to accounting software, where you have a module for banking, invoicing, purchasing, etc. Different modules are used for flight-planning, consulting documents, looking at charts, weather information.

Instead of picking up paper envelope with flight documents, instead of picking up books of charts and manuals, the pilot now picks up a tablet, and synchronises before the flight, gets all the data which is relevant, expired data is removed, he walks away with a tablet in his hand containing those 10,000 pages of paper. Just the fact that AvioBook saves that much paper is one of the positive elements of the software.The benefits go far beyond just getting rid of paper.

The software is a step towards really integrating the airplane and the pilots into a real-time data flow environment. Weather reports, for example, can be updated live in the airplane. This is not just for weather but for all kinds of data, and the pilot can send data back too, for example, fuel orders or technical reports in real-time if they have a satellite communication link. It really connects the airplane much better to the airline.

But, of course, what happens if the tablet slips to the floor and smashes during take-off. The company has produced a full operational risk analysis. It’s an extensive document that exactly describes all of the potential issues, all of the failure cases and for each case, describes a mitigation processes, whether pre-flight or inflight. There is always a backup. One obvious solution is to carry multiple tablets, having multiple servers, and so on. But even in cases when one tablet is broken prior to the flight, and the other tablet fails during the flight, there are backup procedures that take care of that too.

For example, if you leave handicapped from the ground, with one tablet inoperative, then you have to activate a number of backups before you are allowed to leave. For example, you could use the on-board capabilities of the airplane or you could have paper. The system, on the ground, still allows you to print out the critical set of papers to carry in case the other tablet fails.

The company started in 2010, just prior to the iPad’s launch. At that point, nobody was yet familiar with the tablet environment that we all know today. Everyone was used to using pdf and e-mail, but that’s about it. With the iPad we’ve seen a growing appetite for going paperless. Now, probably ninety percent of the operators, if not more, are thinking about or already using some kind of digital system. 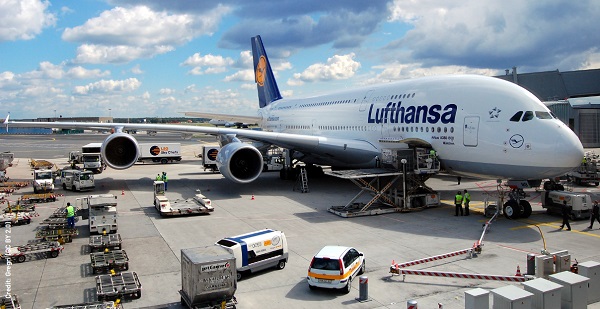 Ground services can be ordered in advance of the aircraft arriving on the ground.

Having started the company in 2010, it took two years to develop the first version of AvioBook. We are currently on the third generation. Between 2012 and 2015, 22 airlines, managing a fleet of approximately 600 aircraft, signed upto use the software. That represents about 10 percent of the total European commercial fleet.

Interest in going digital can be split between four groups. The first group is the airplane manufacturers who are now offering or starting to offer digital solutions for part of their aircraft data.

The second group involved in this digitising process are the people currently providing the data. So, companies providing weather data, flight planning, etc. Currently they provide the information on paper but are migrating their services to the digital world.

The third group working with similar systems or developing them are the airlines themselves, especially the major airlines. They certainly have the competence and the capabilities to design and develop their own system.

And the fourth group are our competitors, software companies offering this software as a service or as a product.

This is complex software, however, and as the market matures so we think that airlines will stick to their core business and buy in a product instead of trying to build it themselves. So we are specialising in being a pure software company and will continue to develop the software to make it as powerful as possible.

There are two advantages to updating things in realtime. The first is about having more accurate data. This is obviously a bonus for weather reports, which could be constantly updated. These could come from the weather prediction centre or from other pilots who report turbulence and other hazardous situations like wind-shear. At present, such information is not automatically relayed efficiently to other pilots. Right now, it’s through air traffic control. They tell you that there is a guy miles upfront, who is reporting turbulence and such. But you may not get this information in time for it to be useful. 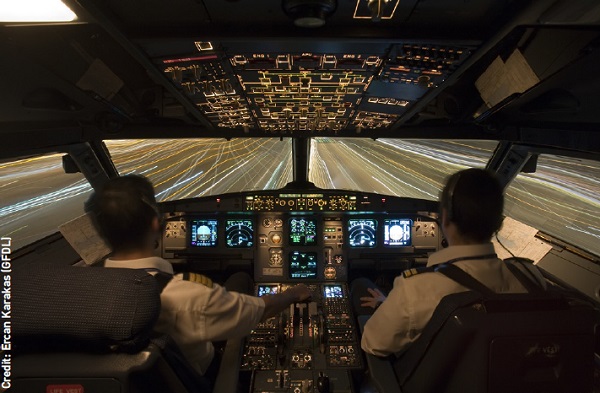 Cockpits are home to some 10,000 pages of paper, including the aircraft and airline manuals.

So, an automatic loop from one pilot to the next on the same route would be great. There is a lot of potential to have a widespread real-time information flow, whether it’s between airplanes, or between airplanes and the base, the airline, and this could be for more than just weather info. It could also be for emergencies, for passenger information, commercial info, and connections. All of this could help the airline to become more efficient and safer.

This goes beyond the airplane, and includes ground services. For example, making sure the fuel guy knows how much fuel the aircraft needs before it even arrives, so he can better plan his route, and there are no mistakes between the fuel the pilot ordered and the fuel that was delivered to the airplane.

So next time you see a pilot carrying an iPad, its probably not because he wants to play Angry Birds during the cruise. 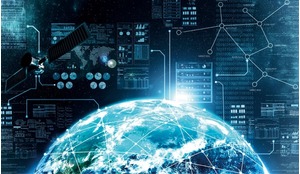 Space investment – from build-up to breakthrough 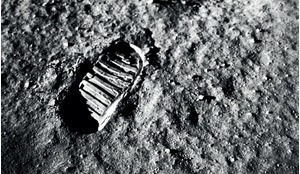