Europa has captured the imagination of scientists and enthusiasts alike with its intriguing features that hint at a hidden ocean beneath its icy surface. So what does lie beneath? And if it is a vast ocean, does it have the right ingredients to support life? Life that is perhaps similar to the creatures found at the depths of our own oceans far away from light and the Sun’s influence? ESA’s JUICE mission will soon be en route to sample, amongst other things, the chemical ingredients of vast plumes shooting up from the moon’s surface, to give scientists more knowledge of how habitable any sub-surface seas might be.

Slightly smaller than our own Moon, Europa is the smallest of the four Galilean moons orbiting Jupiter and its distinguishing surface features have led scientists to suggest that beneath its icy exterior lies an ocean of liquid water. What makes Europa’s ocean interesting compared with other similar moons, is not just that it exists, but that this ocean might be able to support life. Until recently the idea of studying this ocean directly seemed something for the distant future; landing on the surface of Europa and penetrating several kilometres of ice is not an easy task.

Nonetheless, observations taken with the Hubble Space Telescope (HST) seem to indicate that liquid water might be escaping into space from beneath the ice in the form of giant plumes. Flying through those plumes and taking samples might give us direct access to the contents of the ocean, without even having to land on the ice moon’s surface.

The first mission that might be able to exploit this opportunity is the Jupiter Icy moon Explorer (JUICE), comissioned by the European Space Agency (ESA). Scheduled for launch in 2022, JUICE is expected to arrive in the Jovian system in 2029 and head to Europa in the early 2030’s. It will also visit and spend time analysing Jupiter’s other large icy moons, Ganymede and Callisto.

Find out more about the exciting world of Europa and the JUICE mission in the full version of the article, available now to our subscribers. 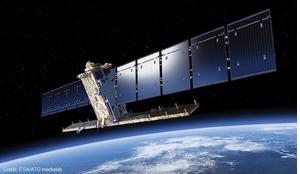