NASA is working on an improved heat shield for the Orion spacecraft using data gathered by Orion on its Exploration Flight Test -1. The heat shield will be used for Orion's Exploration Mission (EM) -1, planned to take off no earlier than the end of 2018.

The heat shield currently being built for NASA's Orion capsule will be a great improvement on its predecessor. The new heat shield will be able to withstand extreme temperatures when Orion goes on its second journey into deep space. Orion's next mission will take the craft around the Moon.

The new shield is being constructed in blocks, with the top layer protecting the crew module from high temperatures. This layer will have about 180 blocks and will be constructed in stages. This innovative heat shield design will save money and cut production time by about two months. Orion is planned for launch on NASA's Space Launch System (SLS) rocket at the end of 2018.

“The heat shield we put to the test during Orion’s flight test last December met every expectation we had and gave us a tremendous amount of data on its thermal and mechanical performance,” said Mark Kirasich, Acting Orion Program Manager. “But the process of building the heat shield as a single piece for that flight also gave us insight into how we could improve the way we build this essential element of the spacecraft.”

Orion, NASA's next generation spacecraft, will take astronauts Beyond Low-Earth Orbit (BLEO) and into deep space. Orion can carry and sustain a crew of four for lengthy periods of time. NASA plans to use Orion for a future manned mission to Mars, although extensive testing must be performed before going ahead with the mission. Orion's unmanned mission provided NASA engineers with vital details on the vehicle's performance and how its systems functioned in space.

Orion's heat shield is one of the most important parts of the spacecraft. It literally shields the craft from extreme temperatures experienced on reentry into Earth's atmosphere. During Orion's Exploration Flight Test (EFT)-1, the heat shield experienced temperatures close to 2,200 degrees Celsius, during which the interior of the capsule was kept in the low 20s. 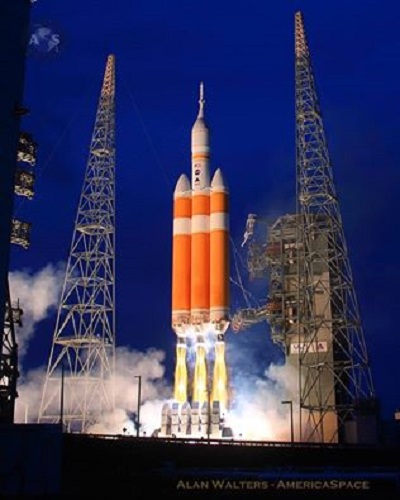 The heat shield on EFT-1 was made up of a titanium skeleton with a carbon fiber coating, topped with a fiberglass-phenolic honeycomb structure with 320,000 miniscule cells. Each cell was filled by hand with an easily eroded material Avcoat that wears away during Orion's reentry into the atmosphere. After being filled by hand, each cell was cured, x-rayed and then robotically checked and fixed for thickness requirements.

The next version of Orion will require an even stronger heat shield, since on EM-1 Orion will go much further into space when it flies around the moon (a distance of almost 400 kilometers).