Best evidence yet for plumes on Europa

Evidence has been mounting for the existence of water plumes bursting from the surface of Europa for a number of years, now, new research from data gathered in situ by the Galileo mission finds the best confirmation yet that plumes are a genuine feature of this ice covered Galilean moon.

Europa is one of the most compelling targets in the Solar System beyond Earth to search for the presence of life. The combination of the moon’s geological, compositional and induced magnetic field measurements all indicate that a salty, liquid water ocean spanning at least 100 kilometres in depth is sloshing about beneath its icy crust.

Taking a peek at what lies beneath to substantiate these claims however seems near impossible, as Europa’s icy shell is expected to be thick, really thick - somewhere in the region of 10 to 20 kilometres thick. So, when images taken by the Hubble Space Telescope showed that ultraviolet emissions from the moon's atmosphere were consistent with two 200 kilometre-high plumes of water vapour, it seemed a new window had opened up in which to study the moon’s interior without having to land on its surface.

Not just that, but plume activity would also indicate that Europa is geologically active today. So, a vast body of water, the right mix of elements (possibly) and chemical energy needed to sustain life - what more could an astrobiologist ask for?!

Verifying the existence of the plumes is therefore of utmost importance and that proof is one step closer to being realised, as a team of researchers from the U.S have reconstructed a plume in 3D based on data taken by the Galileo spacecraft as it skimmed approximately 400 kilometres above the moon’s surface in December 1997.

The data pertains to a number of curious effects seen in the location, duration and variations of the magnetic field and plasma wave measurements taken by Galileo as it swept over the moon. In order to visualise these effects better, Xianzhe Jia from the University of Michigan, lead author of the research along with some colleagues, used ionised oxygen atoms to track the progress of the ions as they interacted with the magnetic field, via a series of three-dimensional (3D) multi-fluid magnetohydrodynamic (MHD) simulations.

And the result; "that a localised signature in the MAG data acquired on Galileo’s closest encounter with Europa is fully consistent with the perturbations expected if the spacecraft crossed a plume rising above the nearby surface," say the team in their research paper.

The team also recreated Galileo’s path around the moon and in doing so, pinpointed the location of the plume on Europa’s surface, which happens to coincide with a thermal anomaly. These anomalies are thought to occur due to the transport of heat from Europa’s interior and are therefore likely to be the preferred location of the plumes.

Once again though, although the data does not show conclusively that the plumes exist, it is the best evidence yet that they are a real feature say the team.

Ironically Galileo ended its mission by plunging into Jupiter's atmosphere in September, 2003 to prevent an unwanted impact with Europa, but the legacy of its treasure-trove of data clearly still lives on.

While these recent findings are not 100 percent irrefutable, they will help facilitate the two future planned missions to the ice world in 2022 – NASA’s Europa Clipper and the European Space Agency’s JUICE mission – whose aim is to determine whether the icy moon possesses the ingredients necessary to support life as we know it, or not. 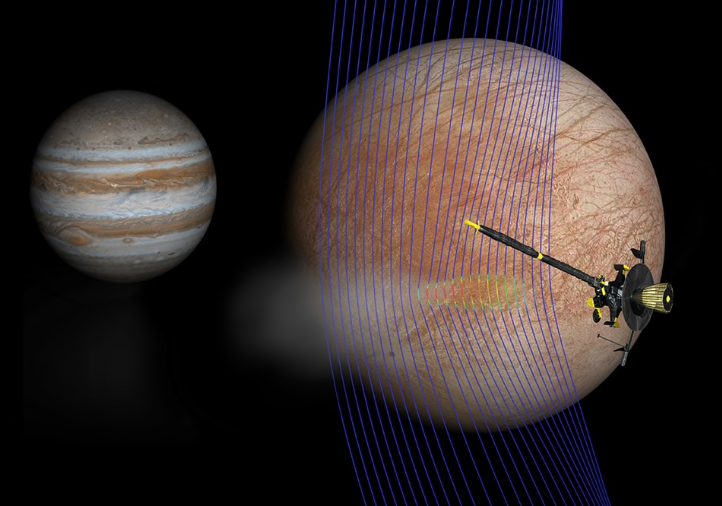 Artist's illustration of Jupiter and Europa (in the foreground) with the Galileo spacecraft after its pass through a plume erupting from Europa's surface. Credit: NASA/JPL-Caltech/Univ. of Michigan