NASA's Cassini spacecraft has detected hydrogen in a plume of gas and icy particles spraying from Saturn's moon Enceladus, prompting the question could it be a suitable energy source for microbes to exist in its sub-surface oceans.

Forty years ago, scientists on Earth found an astonishing oasis of life clustered around vents at the bottom of the ocean. Despite being thousands of metres under the sea and therefore far away from sunlight, life was being sustained via the energy produced from hydrothermal activity released from the vents.

This discovery changed how we thought about how life can cope on our planet and elsewhere in the Solar System. Now, this new detection along with a further revelation that Hubble has also just found additional evidence of plumes erupting from Jupiter's moon Europa, these results are tantalising close to answering whether we are indeed alone in the Universe or not.

"This is the closest we've come, so far, to identifying a place with some of the ingredients needed for a habitable environment," said Thomas Zurbuchen, associate administrator for NASA's Science Mission Directorate at Headquarters in Washington.

The detection of hydrogen gas in the plumes of Enceladus is suggestive that like Earth, hydrogen is pouring into the Moon’s subsurface ocean from hydrothermal activity on the seafloor. If that is the case, then it is also reasonable to think that microbe life – if it exists – could be flourishing due to a process known as “methanogenesis.” This reaction involves combining hydrogen with carbon dioxide dissolved in water to produce methane.

The production of methane is an important and widespread form of microbial metabolism and a source of energy for metabolism is one of the three primary ingredients for life as we know it to exist. The other two necessary ingredients are liquid water and the right chemical ingredients, primarily; carbon, hydrogen, oxygen, nitrogen, phosphorus and sulphur.

From these current observations researchers have determined that nearly 98 percent of the gas in the plume is water, about 1 percent is hydrogen and the rest is a mixture of other molecules including carbon dioxide, methane and ammonia. And although Cassini has not yet shown that phosphorus and sulphur are present in Enceladus’s ocean, it is possible that they are present as the rocky core of this icy world is thought to be chemically similar to meteorites that contain these two elements.

Not only that, but the plumes on Enceladus are associated with hotter regions on the moon. It had already been suggested from previous results in 2015 that hot water on the moon was interacting with rock beneath the sea. This new finding is therefore an independent line of evidence supporting the theory of hydrothermal activity taking place in the ocean of Enceladus. 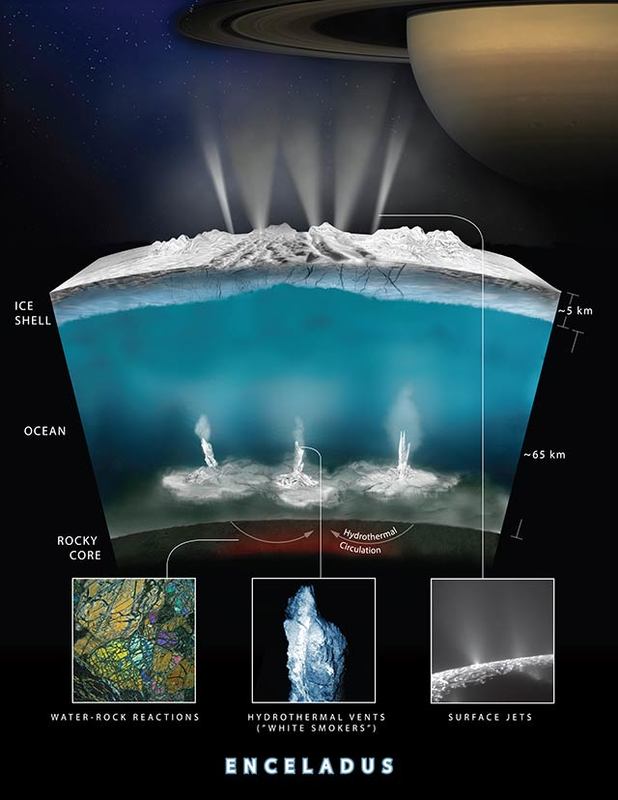 Fortuitously, Enceladus is not the only ‘hot bed’ of activity in the Solar System. A possible plume of material has also been spotted erupting from the surface of Europa last year, in the same place that one was spotted by Hubble in 2014. Like Enceladus, both plumes correspond to the location of an unusually warm region that is marked by features that could be cracks in the moon's icy crust.

“After Hubble imaged this new plume-like feature on Europa, we looked at that location on the Galileo thermal map. We discovered that Europa's plume candidate is sitting right on the thermal anomaly," said William Sparks of the Space Telescope Science Institute in Baltimore.

If the plumes and the warm spot are linked, it could be indicative of water being vented from beneath the moon's icy crust and warming the surrounding surface. Hopefully, NASA's Europa Clipper mission, which is planned for launch in the 2020s will be able to verify if this is the situation or not.

"If there are plumes on Europa, as we now strongly suspect, with the Europa Clipper we will be ready for them," said Jim Green, Director of Planetary Science, at NASA Headquarters.