Once upon a time finding an exoplanet was a big deal, but now 3000+ discoveries in, we strive to find more; more variety, more planets in one system, and more details about the planet itself. What could be bigger than finding signs of a thriving community on a planet light years from our own? A novel idea currently under consideration by scientists at JPL and Aerospace might one day show us just that as they are working on plans for a solar gravity lens (SGL) – a cluster of small sats which act like a lens to provide up to a 100-billion optical magnification – this would show details as small as 10 kilometres across on the surface of a faraway world.

Our current telescopes are adept at finding small, rocky Earth-like planets by indirect methods, but they cannot ‘see’ them directly. And if they could just about make out the tiny pin-prick of dull light against their luminous host star, the minuscule dot would be completely featureless. If the project gets the go ahead, SGL on the other hand would be able to spot something the size of New York City on an exoplanet 100 light years away.

How will it do this? According to Einstein’s theory of relativity, light traveling through space will bend if it passes near sufficiently massive objects; an effect known as gravitational lensing. Simply put, mass bends light.

The method behind gravitational lensing is used in every day situations all around us. For example, normal lenses, such as the ones in a pair of spectacles, use a process known as refraction to bend the light rays that pass through them in order to focus the light somewhere else – in this case, its your eye.

On much larger scales, the mass from a cluster of galaxies can act as a huge gravitational lens, by refocusing or bending the light of a much smaller, fainter object hidden behind to a different region of space so that astronomers can ‘see’ this once obscured background target. The lensed object then appears to an observer on Earth as a ring - a phenomena known as an Einstein ring.

The SGL will work on a similar principle. As light from the distant world approaches our nearest star, it will bend around the periphery of the sun, eventually converging toward a focal region as if it had passed through a lens, where it will appear as a ring-like image.

The swarm of small sats will be stationed at the focal point ready and waiting to collect images of the exoplanet in this ring configuration, which will then be pieced back together on Earth.

This might seem all straight forward, but this focal point is around 80.5 billion kilometres (50 billion miles) or 550 astronomical units (AU) away from the planet we live on. Thats a heck of a distance for a small sat to navigate considering that the Voyager probes are still less than 150 AU from Earth even after travelling for more than 40 years.

SGL has this covered however. The array of detectors – the small sats – will use solar sails to slingshot themselves around the Sun at speeds of over 120 kilometres (75 miles) per second. After they pass Jupiter, the sails will be jettisoned and the small sats will continue on their epic journey by electric propulsion. Despite this innovative solution, it will still take 30 years for the small sets to get to the right location.

The difficulties don’t stop there though. The light from the exoplanet will be spread out over a 1.6 kilometre (1 mile) wide line as it passes the Sun, therefore sensors on the spacecraft will need to keep the craft in the same line as the light. Not only that but the spacecraft will have to be adaptable as the roundtrip communications link of six light days will make ground control of the spacecraft impractical, so they will use artificial intelligence to learn from its own experience.

Still, if this all sounds like an impossible task, for instance, the small sat would need to be under 10 kilograms to make use of a solar sail to achieve the needed velocity, and they would need to travel so so far, remember that NASA has experience of rendezvousing with a fast moving asteroid and Aerospace have decades of experience and technical leadership across the space industry.

“The team has leveraged an incredible array of groundbreaking technologies that have applications that go beyond exoplanet exploration,” said Steve Isakowitz, Aerospace’s president and CEO.

“The technologies involved in the distributed swarm — longevity, agility, autonomy, and self-learning — could revolutionise the space industry as a whole,” added Henry Helvajian, senior scientist in Aerospace’s Physical Sciences Laboratory and technical co-lead of SGL.

The idea is still confined to the drawing board at the moment but has been awarded $130,000 from Phase II of NASA’s Innovative Advanced Concepts (NIAC) program to help develop the proposal over a two year period.

But if the mission got the go ahead, then we Earthlings would get to see the first ever close-up of an alien world light years from our home. “It would be one of the most spectacular moments in human history, if we discovered that there were traces of intelligent life on another planet,” concluded Heinsheimer. 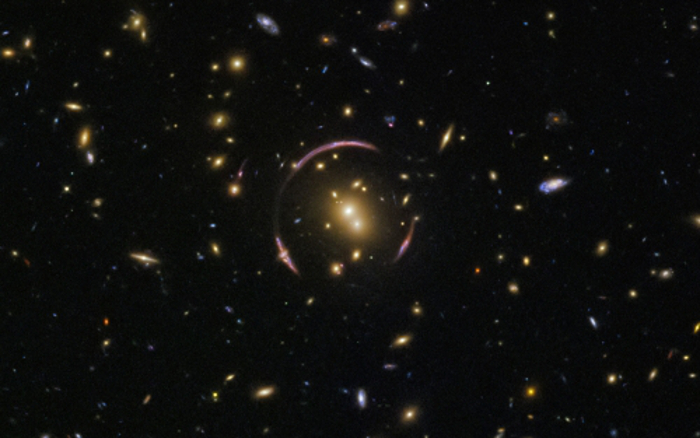 In observational astronomy an Einstein ring, also known as an Einstein–Chwolson ring or Chwolson ring, is the deformation of the light from a source into a ring through gravitational lensing of the source's light by an object with an extremely large mass. Image: Wikipedia