How fast the Universe is expanding depends on what celestial object or phenomena you look at, because as with many measurements involving the vast expanses of space, the results don’t always match up with one another. In the past measurements from pulsating stars or the cosmic microwave background have been used, but now a team of scientists have thrown another target into the mix – light from red giant stars – and calculations based on these studies falls squarely in the middle of other competing values, adding to the uncertainty surrounding this fundamental parameter.

Nearly a century ago, astronomer Edwin Hubble discovered that distant galaxies were whizzing away from our own Milky Way at incredible speeds. This led to the notion that the Universe has been expanding continuously since it popped into existence over 13 billion years ago. His observation led to the creation of the Hubble Constant; a cosmological parameter that sets the absolute scale, size and age of the Universe. It is one of the most direct ways scientists have of quantifying how fast space is stretching, but so far, no one can quite agree on its precise figure.

Until now, there have been two primary methods used to measure the Universe's rate of expansion; one study uses stars called Cepheids, which pulsate at regular intervals. The other uses the oldest light we can see, the cosmic microwave background. This latter method involves mapping slight temperature variations in the thick, soupy plasma that filled the newborn Universe and running them forward in time via computer simulations to predict the present-day Hubble constant.

The Cepheid method on the other hand, uses variable stars as distance markers. Cepheid variable stars are thousands of times more luminous than the Sun and by observing the period of any Cepheid, you can deduce its absolute brightness; the brightness a star would have if it were placed at a standard distance of 10 parsecs from Earth. Then, using an observation of its apparent brightness – how bright the star appears from Earth – the distance to it can be calculated.

If you compare how bright distant Cepheids appear to be against the brightness of nearby Cepheids then scientists can determine how far away each of the stars' host galaxies are from Earth. When a celestial object's distance is known, such as Cepheid, a measurement of the speed at which it is moving away from us reveals how fast the Universe is expanding.

Herein lies a problem; the Cepheid technique says the expansion rate of the universe is 74.0 kilometres per second per megaparsec (a megaparsec is equivalent to 3.3 million light years or 3 x 10^22 metres); whereas the CMB result plots the expansion at 67.4 km/sec/Mpc.

Now, there is a third offering. Like the calculable manner in which Cepheids pulsate, red giant stars experience an evolutionary period known as the ‘helium flash,’ where helium in these luminous stars is ignited, and their structures are rearranged by this new source of energy in their cores. This peak brightness is the same for all red giants, and as such astronomers can capitalise on this known quantity as a way to measure their distance.

In this case it was a team of collaborators from Carnegie and the University of Chicago led by Wendy Freedman. Freedman has studied the Hubble constant for three decades and she too used Cepheid variables in past studies to calculate the Hubble Constant. Now Freedman has turned her attention to red giant stars to measure distances and the latest results thicken the plot further.

"Our initial thought was that if there's a problem to be resolved between the Cepheids and the Cosmic Microwave Background, then the red giant method can be the tie-breaker," said Freedman.

However, using this alternative method, Freedman and colleagues arrive at a Hubble constant of about 70 km/sec/Mpc —a figure slap-bang in the middle of the duelling predominant methods.

What now then? Scheduled to launch in the mid-2020s, NASA's upcoming mission, the Wide Field Infrared Survey Telescope (WFIRST), could one day provide a definitive figure for Hubble’s constant as the powerful space observatory aims to collect a wealth of information on new Type Ia supernovae, Cepheid variables, and red giant stars, amongst other celestial objects.

Its Hubble-like resolution and 100 times greater view of the sky should therefore fundamentally improve distance measurements to galaxies near and far, thus helping to establish once and for all the true expansion rate of the Universe, or whether scientists need to come up with a new model for the underlying physics of the Universe in order to explain it. 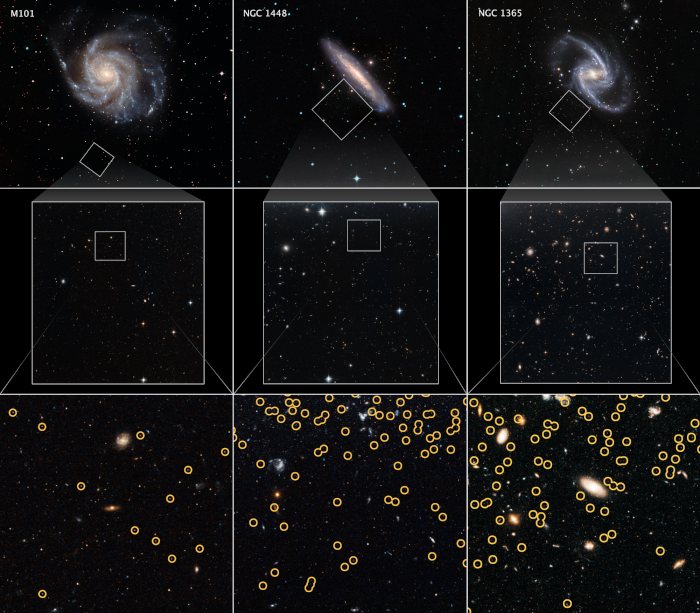 These galaxies are selected from a Hubble Space Telescope program to measure the expansion rate of the universe, called the Hubble constant. The value is calculated by comparing the galaxies' distances to the apparent rate of recession away from Earth (due to the relativistic effects of expanding space). By comparing the apparent brightnesses of the galaxies' red giant stars with nearby red giants, whose distances were measured with other methods, astronomers are able to determine how far away each of the host galaxies are. This is possible because red giants are reliable milepost markers because they all reach the same peak brightness in their late evolution. And, this can be used as a "standard candle" to calculate distance. Hubble's exquisite sharpness and sensitivity allowed for red giants to be found in the stellar halos of the host galaxies. The red giants were searched for in the halos of the galaxies. The center row shows Hubble's full field of view. The bottom row zooms even tighter into the Hubble fields. The red giants are identified by yellow circles. Image: NASA, ESA, W. Freedman (University of Chicago), ESO, and the Digitized Sky Survey.