Amateur satellite observers are keeping a close eye on a US National Reconnaissance Office classified satellite (USA 276) to see whether it returns to the vicinity of the International Space Station (ISS). After its launch into orbit from Cape Canaveral by SpaceX on 1 May 2017 analysts around the world quickly realised it was doing something more unusual.

Its orbit was similar to that of the Space Station and so could theoretically make close approaches to the orbiting outpost.

Then, just over a month after launch on 3 June, that is exactly what happened. "USA 276 made a close approach and effectively circled the ISS," reported satellite bserver Marco Langbroek of Leiden, The Netherlands.

Amateur satellite watchers have been tracking USA 276 since late May and their observations have resulted in ever-improving estimates of the satellite's orbit.

In the accompanying chart (below) showing the circumstances of the encounter, the brick-coloured box has dimensions of 4 x 4 x 10 km and normally, whenever an object looks like it is going to pass through the box, ISS mission controllers evaluate the possibility of a collision avoidance manoeuvre. 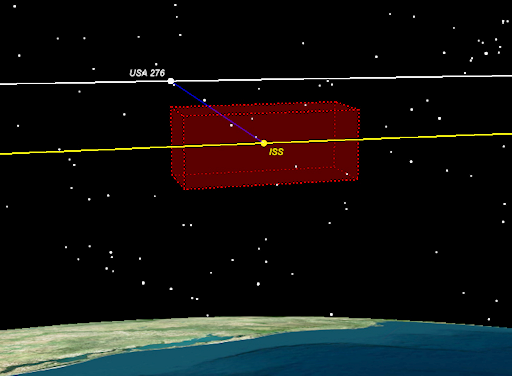 "USA 276 remained just outside the 4 x 4 x 10 km box at closest approach and as a result collision avoidance manoeuvres were not required,” adds Langbroek.

The question arises as to why a US spy satellite buzzed the ISS and senior satellite analyst Ted Molczan has published arguments for and against that possibility. "I am inclined to believe that the close conjunctions between USA 276 and the ISS are intentional," he says.

Molczan points out that USA 276 might be visiting the ISS to test Raven - a technology demonstration project on the ISS researchers are using to develop spacecraft autopilot systems. Raven has visible, infrared and lidar sensors that can track incoming spacecraft, feeding the data to an onboard processor for decision-making about rendezvous and docking.

"I imagine that USA 276 could add to the Raven data set as follows," speculates Molczan. "If it can rendezvous, then it could keep station for long periods, during which it could change its attitude to present the sensors with a variety of views, under a variety of lighting conditions. The total data collected could potentially far exceed that from the other visiting spacecraft."

Another way of looking at the problem, is to ask why, if the ISS is not a target of USA 276, would the highly secretive NRO have permitted a launch so close to its plane, let alone one that yielded such close conjunctions not long after launch, which could only have increased public interest in the mission?

Langbroek says he does not believe for a moment that the NRO was not aware that the launch on 1 May would lead to the ISS close approach a month later. “It would be extremely sloppy of them - from a Space Situational Awareness (SSA) viewpoint - if they were not aware, especially given how close the orbital parameters are to that of the ISS.”

He adds: “This event was sure to attract attention which harms the classified character of the mission. USA 276 is relatively bright and the approach was bound to be noted by independent observers.

“Indeed, some space enthusiasts in Europe unaware of the issue who were out to spot Dragon CRS-11 and Cygnus OA-7 close to the ISS on 4 June, did accidentally see USA 276 passing some three minutes in front of it.

At the time of the launch – and at the request of the NRO – SpaceX cut off launch coverage two minutes and 48 seconds after liftoff, some 30 seconds after the booster’s first-stage separated from the upper-stage. The NRO has declined to provide further details about the satellite or its orbit.

Langbroek also speculates that such a close approach of a high profile object like the ISS is politically risky too.

“As the ISS is an international cooperation which includes two parties (the United States and the Russian Federation) that are currently geopolitically on an uneasy footing, sending your military payload so close to the ISS as one party is eyebrow raising,” he says.