However, in all these cases, the stations worked independently and did not involve any collaborative work of any kind. The only exception was in 1986 when the Soyuz T-15 docked with the newly-launched Mir orbital complex and the soon-to-be-retired Salyut 7 station, and equipment was transferred from Salyut 7 to Mir. It was the only time in history that a crewed spacecraft docked with two space stations on the same mission - and the only time in history crew and equipment were transferred between space stations. 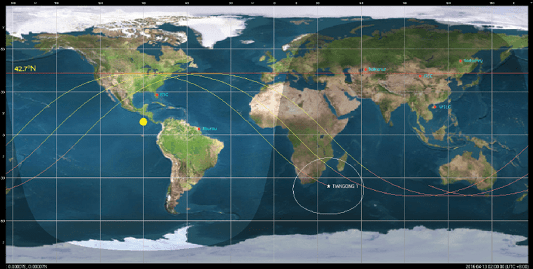 Above Left: Ground track of the Tiangong 1 orbit with inclination of 42.7 degrees (only last three orbits are shown). CSS will be in a very similar orbit with the same inclination. 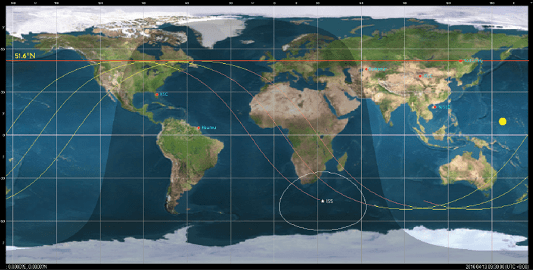 Ground track of the ISS orbit with inclination of 51.6 degrees (only last three orbits are shown) Chen Lan/Sebastian Stoff

To complete such a task requires that the two stations fly in the same orbit. In fact, co-orbital flight has far more benefits than the flight in 1986 demonstrated because it opens up a range of extremely important advantages:

The opportunity we now have is very rare and I believe this proposal is technically and politically feasible - and is the most realistic, lowest cost and easiest to implement solution

We may call such a co-orbital station scenario ‘space station formation’. The spacecraft fly at different positions in the same orbit, work independently but can also collaborate. Such a formation can be seen as an integrated ‘virtual’ space station playing many more roles than a single station normally plays, along with safety and redundancy functions a single station could not provide. Formations could easily be extended, perhaps with craft like the Bigelow commercial modules. 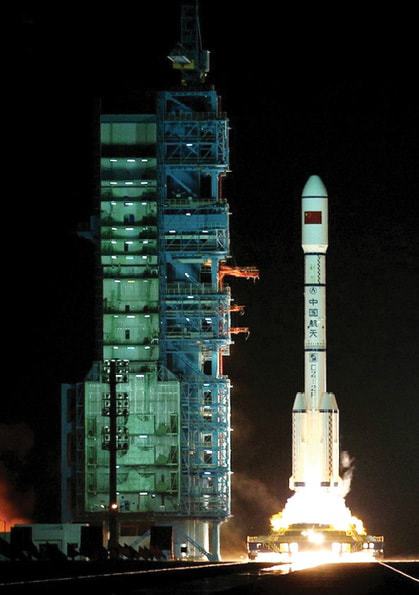 The proposal here is to launch the Chinese Space Station (CSS) to the ISS orbit with a certain distance apart of, say, 100 km. Each station runs independently but can also work jointly to support the other. Visiting vehicles, with equipment/supply and crew could move relatively quickly and easily from one station to another. Such a concept places the world’s human spaceflight programmes into a single framework, which not only increases safety and scientific return, but also extends the spirit of international cooperation spirit started on the ISS. 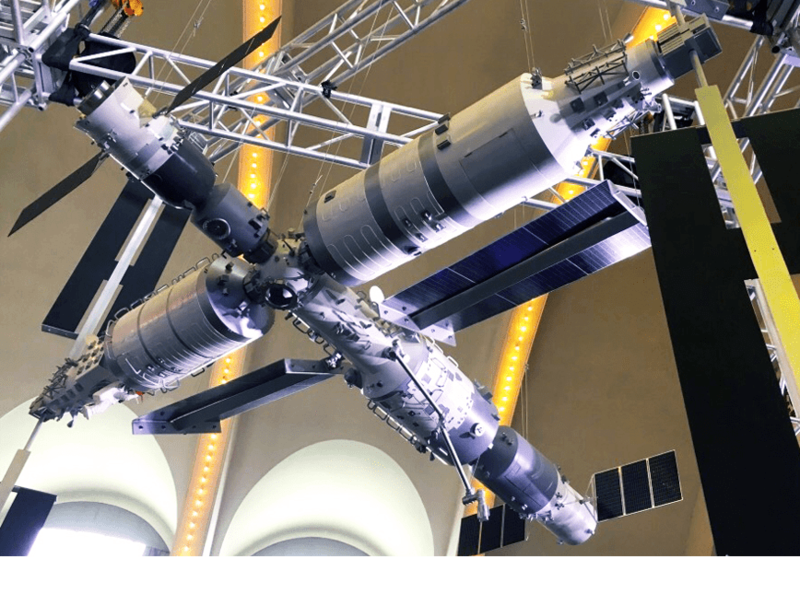 A scale model of CSS displayed in China this May. It is probably close to the final design and shows finer detail than previous seen.

As suggested above, a space station formation has many advantages, the most critical of which is increased safety. Compared to Russia and the US, China has limited experience on long-duration space station operations. If an accident, like an unexpected collision, fire or control computer malfunction - all of which occurred on Russia’s Mir space station - happens on the CSS, the rescue capability provided by the nearby ISS becomes critical. Thanks to compatibility of the docking port and communication system, the Russian and US-American manned and cargo space vehicles on the ground make an emergency rescue launch possible. When in the ISS orbit, Russian rescue vehicles from Baikonur and Vostochny launch sites could can also reach the CSS, providing further safety guarantees.

In the case of Shenzhou or Tianzhou cargo vehicles being grounded, China could also continue with station operations by relying on transportation vehicles from other countries or commercial vehicles, a similar situation to the way that the US has been able to continue working on the ISS after the Space Shuttle was grounded.

There would also be other advantages brought about by two co-orbiting space stations. For example, increasing the inclination of the orbitwould enlarge the area of Earth covered to include the whole of China, the US and Japan, as well as most of Europe. China’s free-flying telescope could also be serviced by the ISS if needed.

The CSS could become ‘ISS 2’ and co-orbiting with the ISS would make this more feasible and economically viable. One example is ESA’s Columbus module - it was launched relatively late in the ISS programme and has a longer remaining working life. If the CSS is in the same orbit Columbus could be transferred to the CSS and continue to work after retirement of the ISS.

On the other hand, for launching the CSS into the ISS orbit, China has to solve the following two major technical issues requiring a certain amount of investment:

The ISS orbit is circular at about 400 km with an inclination of 51.6 degrees compared to the CSS’s planned 42-43 degrees, 300-350 km orbit. All visiting cargo and crew vehicles have also to be launched into this orbit and it is likely that China’s CZ-5B launcher, reserved for lifting the station modules, the CZ-2F vehicle, designated for launching the Shenzhou, and the CZ-7, planned to launch the Tianzhou cargo vehicles, will fall slightly short of the required payload capability. 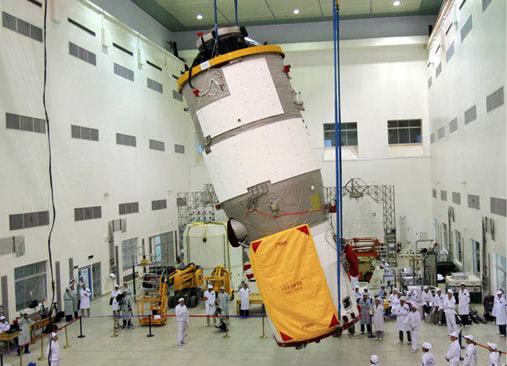 Tiangong 1 during ground tests before its launch on 29 September 2011. It ceased working in March 2016 after smooth operation for nearly four-and-half-years in orbit.

By cutting fuel and taking out removable equipment in the spacecraft, and lowering the ISS orbit to about 350 km (as it was before 2011), it may be possible to solve this problem. And once the CSS is completed it would still be possible to raise its orbit to the 400 km ISS orbit.

A change of inclination also changes downrange launch site parameters as well as the flight path before landing. It would render some tracking stations and China’s current backup landing zone near Jiuquan unusable. This would mean building new tracking stations southeast of Jiuquan and southwest of Siziwang Banner, the primary landing zone, and a new back-up landing zone southwest of Siziwang Banner for the case of ballistic re-entry. Also, tracking ships would have to be re-deployed in the Indian Ocean and near the Wenchang Space Launch Centre, and all emergency landing sites worldwide would have to be re-planned and prepared.

There are now just over two years before the planned launch of the first experimental core module of the CSS in 2018. It would be a major technical challenge to implement the proposal presented here, not to mention the huge political obstacles.

A CSS-ISS formation not only benefits China. It would also be of great value to the existing ISS partners. The ISS has been up and running for more than 17 years and by its planned retirement in 2024 (or 2028), it will have been working for 25 years (or 29 years). Its aging equipment is becoming the most serious safety threat and so safety guarantees provided by the ‘station formation’ would be extremely valuable.

Some ISS partners will also face important choices after the retirement of the ISS. For Europe, there seems no other choice except for joining the US deep-space exploration programme, which almost means relinquishing human spaceflight activities in LEO. Cooperation with CSS, however, would open a new door for Europe to continue its presence in LEO.

For Russia, the ability to implement its independent space station plan has always been associated with many question marks and cooperation with China might also a good choice. If the CSS-ISS formation is realised, the last launched ISS modules - such as the Columbus and the Multi-purpose Laboratory Module (MLM or Nauka, planned launch in 2017) - could be transferred to the CSS to continue their missions.

For this proposal, political obstacles are going to prove much more challenging and difficult than technical issues. During last October’s International Astronautical Congress (IAC) in Jerusalem, ESA Director General Johann-Dietrich Worner was quoted as saying he wants China to give up its own space station in favour of joining the ISS.

It seems that Prof Worner may not be aware of the history of the Sino-US space cooperation. China has expressed its willingness to join the ISS many times, starting from the end of the 1990s to the mid-2000s but all attempts were rejected by the United States. And up to know the US Congress has not changed its attitude on Sino-US space cooperation. On the other hand, with only just over two years before the launch of its core module, it is impossible for China to give up its independence and long-term plan, in favour of the ISS, binding China’s future human spaceflight activities to the ISS and with less than 10 years of working life.

Russia’s plan to separate its segment from the ISS and the problems caused by the Ukraine crisis, may also have been a reminder to China not to repeat Russia’s path. There are potential conflicts of interest, global and regional, between China and the US, and in the future China may face a similar or more serious situation than Russia is facing today. 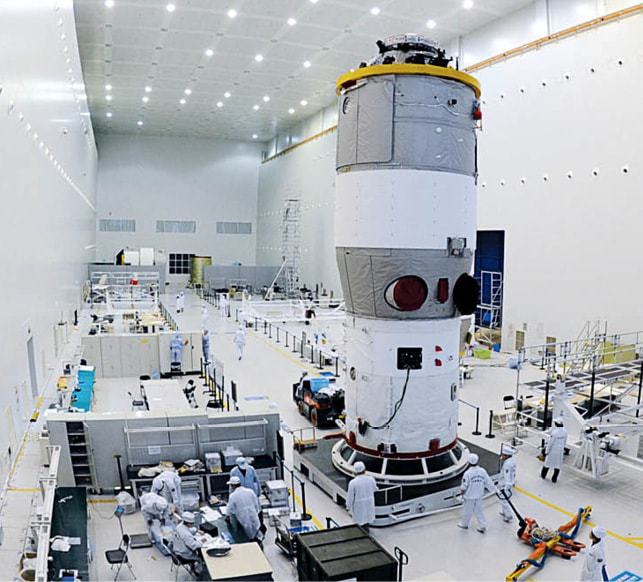 Tiangong 1 during final test and launch preparation. Two telescope-like cylinders are clearly seen at the side of the TG-1’s intersecting segment.

Based on the above analysis, it is both unrealistic and unreasonable for China to push its cooperation unilaterally, even for this less difficult proposal. To implement it, China would be the party to take up most of the work, investment and risks. China will be actively involved only if the other parties have shown their good faith and commitment - and a change of US attitude is a prerequisite for cooperation. So, it may fall to Europe, (or ESA) as being in the best position to lead and push this project.

It would, however, have to take on the following tasks:

To complete the above work within three to five years is not an easy job. But the opportunity and window we now have is very rare. I believe this proposal is technically and politically feasible, and is the most realistic, lowest cost and easiest to implement solution. However, there is not much time left. It needs a strong will and a resolute decision from both sides with which all challenges can be overcome. CNSA, ESA and NASA all have a rare opportunity to take some action quickly to grab this opportunity and in doing so change the post-ISS history of human spaceflight for decades to come.

Chen Lan is an independent analyst. He created the Go Taikonauts! (www.go-taikonauts.com) website in 1998 and is co-founder and contributor to the Go Taikonauts! electronic magazine. He thanks Jacqueline Myrrhe and William Carey for valuable opinions and support during writing of this article. 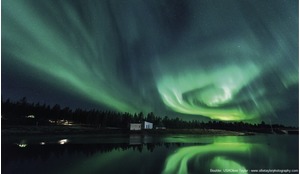